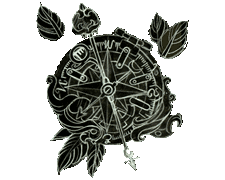 Unfailing and impartial justice; the perfect figure of the circle with central point, the source of life. With the square, the compasses define the limits and the bounds of rectitude. In sacred architecture the compasses rapresent trascendent knoledge; the archetype controlling all works; the navigator.
Chinese. Right conduct. An attribute of Fo-hi, whose sister, Niu-Kua, holds the square; together they are the male and female principles, the yin-yang armony.
Greek. With the globe, an attribute of Urania.
Cardinal Points
Chinese and Toltec astronomy both divide the world into five direction, with the Centre as the fifth. The cardinal points play an important part in burial ceremonies and customs. There are four Sumero-Semitic gods identified with the four cardinal points.

Coldness, darkness, obscurity, the land of the dead, night, winter, odl age, exept in Hindu or Egyptian symbolism when it is lightness and the day, and a masculine power,

Represented by the noonday sun, fire, warmth, youth, summer, the masculine principle, exept in Egypt where it is darkness and the feminine elemnt and the region of hell and the god Amset. Cerimonies concentred with death and resurrection stress the East as sunrise and life and the West as sunsent and death.

The rising sun, dawn, spring, hope, childhoos, dawning life, youth. It is the direction towards which worship is oriented especially for all solar Gods.

Autumn, the dying sun, middle age. The western direction is universally associated with dying , ”going west”.
Ameridian. The home of the Thunderer.