A highly complex and universal symbol. The serpent and dragon are often interchangeable and in the Far East no distinction is made between them.

The symbolism of the serpent is polyvalent: it can be male, female, or the self-created. As a killer it is death and destruction; as renewing its skin periodically it is life and resurrection; as coiled it is equated with the cycles of manifestation. It is solar and lunar, life and death, light and darkness, good and evil, wisdom and blind passion, healing and poison, preserver and destroyer, and both spiritual and physical rebirth. 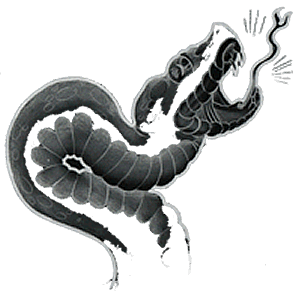 It is phallic, the procreative male force, ‘the husband of all women’, and the presence of a serpent is almost universally associated with pregnancy. It accompanies all female deities and the Great Mother, and is often depicted twining round them or held in their hands.

Here it also takes on the feminine characteristics of the secret, enigmatic and intuitional; it is the unpredictable in that it appears and disappears suddenly. The serpent was also believed to be androgynous and is the emblem of all self-creative divinities and represents the generative power of the earth.

It is solar, chthonic, sexual, funerary and the manifestation of force at any level, a source of all potentialities both material and spiritual, and closely associated with the concepts of both life and death. Living underground, it is in touch with the underworld and has access to the powers, omniscience and magic possessed by the dead.

The chthonic serpent manifests the aggressive powers of the gods of the underworld and darkness; it is universally an initiator and rejuvenator and ‘master of the bowels of the earth’. When chthonic it is the enemy of the sun and all solar and spiritual powers and represents the dark forces in mankind. Here the positive and negative, light and darkness, are in conflict, as with Zeus and Typhon, Apollo and Python, Osiris and Set, the eagle and serpent, etc.

It also signifies primordial instinctual nature, the upsurging life-force, uncontrolled and undifferentiated; potential energy; animating spirit. It is a mediator between heaven and earth, earth and the underworld, and is associated with sky, earth and water and in particular with the Cosmic Tree. It is also the cloud-dragon of darkness and guards treasures.

The serpent can depict solar rays, the course of the sun, lightning and the force of the waters, and is an attribute of all river deities. It is knowledge; power; guile; subtlety; cunning; darkness; evil and corruption and the Tempter. ‘It is fate itself, swift as disaster, deliberate as retribution, incomprehensible as destiny’.

Cosmologically the serpent is the primordial ocean from which all emerges and to which all returns, the primaeval undifferentiated chaos. It can also support and maintain the world, or encircle it as OUROBOROS, the symbol of cyclic manifestation and reabsorption.

Coiled round the Tree or any axial symbol, it is the awakening of dynamic force; the genius of all growing things; the anima mundi; cyclic existence.

Coiled round a woman, who is the Great Mother, the lunar goddess, the serpent is solar and together they represent the male-female relationship. The serpent, like the toad, is said to have a jewel in its head and possess treasures and magic rings.

When the eagle or stag appears with the serpent they are solar and manifest light with the serpent as darkness, the unmanifest and chthonic; together they are cosmic unity, totality; in conflict they portray duality, the pairs of opposites and the celestial and chthonic powers at war. The eagle is often depicted with the serpent in its talons, or the stag as trampling it underfoot, typifying the victory of good over evil, light over darkness, heavenly over earthly and spiritual over temporal powers. The fiery serpent is solar, purification, the transmuting and transcending of the earthly state.

As a girdle or bracelet the serpent depicts the eternal revolution of the ages; succession; the cycle of dissolution and reintegration. Lozenges as ornaments on a serpent represent the phallic serpent and the female vulva as the solar-lunar, male-female unity, dualism and reintegration; the reconciliation of opposites; the androgyne.

Two serpents together symbolize the opposites of dualism which are ultimately united. Entwining a tree or staff they are the spiral cycles of nature; the solstices; the two fundamental forces of winding and unwinding; the alchemical solve et coagula.

On the CADUCEUS they represent the homeopathic powers of healing and poison, illness and health, ‘nature can overcome nature’. Wound round each other they are Time and Fate, the two great binding powers.

Two serpents or dragons biting each other’s tails suggest that, although in seeming opposition, forces and things in the realm of duality actually spring from the same source and principle.

The eggs of the reptile signify rebirth and its lidless eyes denote watchfulness, hence wisdom. The serpent often holds the fruit or herb of immortality. Sometimes the symbolism of the bull and ram are shared with the serpent as phallic, fertility and procreative power.

The serpent as a rainbow that quenches its thirst in the sea occurs in French, African, Indian and Amerindian symbolism.