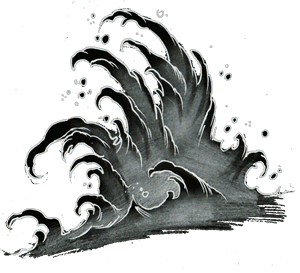 The waters are the source of all potentialities in existence; the source and grave of all things in the universe; the undifferentiated; the unmanifest; the first form of matter, ‘the liquid of the whole verification’ (Plato).

All waters are symbolic of the Great Mother and associated with birth, the feminine principle, the universal womb, the prima materia, the waters of fertility and refreshment and the fountain of life.

Water is the liquid counterpart of light.

The waters are also equated with the continual flux of the manifest world, with unconsciousness, forgetfulness; they always dissolve, abolish, purify, ‘wash away’ and regenerate; they are associated with the moisture and circulatory movement of blood and the sap of life as opposed to the dryness and static condition of death; they revivify and infuse new life, hence baptism by water or blood in initiatory religions in which the water or blood also washes away the old life and sanctifies the new.

Immersion in water not only symbolizes the return to the primordial state of purity, death to the old life and rebirth into the new, but also the immersion of the soul in the manifest world.

The waters of the Spring, or Fountain of Life, rise from the root of the Tree of Life in the centre of Paradise. As rain, water is the inseminating power of the sky god, fertility. As dew it is benediction and blessing, spiritual refreshment and the light of dawn.

To dive into the waters is to search for the secret of life, the ultimate mystery.

Running water is ‘water of life’ or ‘living water’.

Crossing waters is to move from one ontological state, or plane, to another; it is also separation as the sea or river of death, but, as water can be the power of both life and death, so it can also both divide and unite.

Water and fire are the two conflicting elements that will ultimately penetrate each other and unite; they represent all contraries in the elemental world. In a state of conflict they are the heat and moisture necessary for life, but ‘burning water’ is the union of opposites. Fire and water are also associated with the two great principles, the Sky Father and the Earth Mother, but the Sky Father can also represent the fecundating moisture of rain falling on the earth.

Water with wine signifies the blending of the human and divine nature, or divinity mingled invisibly with humanity. In Christian art it depicts Temperance. Surrounding water, e.g. a moat, furrow, gutter, etc., is not merely defensive but the water makes the place within pure and encloses the sacred space.

Water with clay is creation and also represents the potter as the shaper of the universe.

Deep waters, e.g. seas, lakes, wells, are associated with the realm of the dead, or are the abode of supernatural beings and are closely connected with the Great Mother.

The Lower Waters are chaos, or the everchanging manifest world, and the Higher Waters are the realm of the unifying waters; these are also connected with the Lesser and Greater Mysteries, and together they complete the One and mark the universal regeneration.

Troubled waters depict the vicissitudes, illusion and vanity of life, ‘the phantom flux of sensations and ideas’.

Running water signifies life, the ‘waters of life’, the river, spring, or fountain of life, symbolized by the undulating line, or by the spiral or meander.

The waters, like the tree, grove, stone, mountain, can represent the cosmos in its entirety. Symbols of the life-giving, life-destroying, separating and uniting powers of the waters are often composite creatures, monsters or dragons, serpents, the falcon, lion, crocodile and whale, while the nourishing and fertilizing power is depicted in the cow, gazelle and, pre-eminently, the fish. Water is of great significance in magic rites.