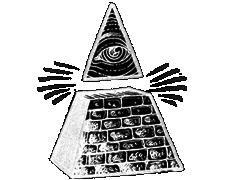 The Pyramind symbolizes a world Centre and axis mundi representing the primaeval Sacred Mountain, which is often a four-sided, such as Mountain Meru. The aprex of the pyramid symbolizes the highest spiritual, hierarchical and initiatory attainment; it also depicts fire, the flame, the solar masculine force and is phallic. The pyramid whit steps signifies the structure of the cosmos and the planes of consciousness; also the ascent of the sun in the firmament. Plato uses the pyramid to symbolize the earth element, with the cube as air, octhaedron as fire, icosahedron as water and dodecahedron as ether. In Aztec symbolism the pyramid is the fifth sun of Quetzalcoatl.