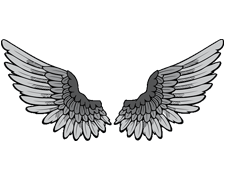 The Wings are almost entirely exclusive to western and Middle Eastern representations of divinities and supernatural beings. Far Eastern and Indian divine or supernatural beings, except for the Garuda, Cosmic Horse and Winged Dragon, do not share in wing symbolism. Wings are solar and depict divinity, spiritual nature, the moving, the power to transcend the mundane world, the ubiquitous, the air, wind, spontaneous movement, the flight of time, the flight of thought, volition, mind, freedom, victory and swiftness.

Wings are attributes of swift messenger gods and denote the power of communication between gods and men. Outspread wings are divine protection, or the shrouding of the heavens from the fierce heat of the sun. The ‘shadow of wings’ is protection and trust. The winged sun, or DISC (q.v.), is the untiring journey of the sun across the firmament; the triumph of light over darkness; power from heaven; divinity. Winged deities are sun gods or gods of the Empyrean; but they are ambivalent as there are winged powers of evil and winged devils. Winged cap, sandals and caduceus indicate a messenger of the gods. The winged horse is solar and is ridden by heroes, or it is the Cosmic Horse.