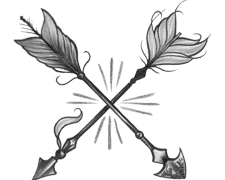 The arrow is a  piercing, masculine principle; penetration, phallic, lightning, rain, fecundity, virility, power and war. A flight of arrows symbolizes ascent to the celestial, Arrows loosed from a bow represent the consequences of acions whichcannot be recalled or revoked. The arrow, as with the lance and sword, is a solar symbol depicting the sun’s rays, also the attribute of the warrior. An arrow piercing a serpent is the sun’s rays piercing the dark clouds of the humid principle. The broad arrow (the fleur-de-lis) denotes royal property.

“I used to be an adventurer like you, then I took an arrow in the knee.” -Skyrim City Guards.